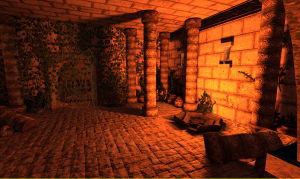 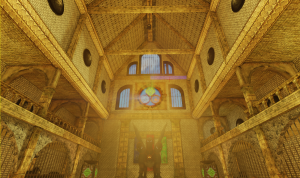 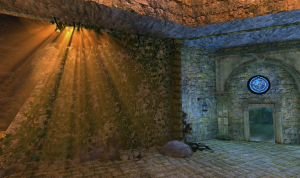 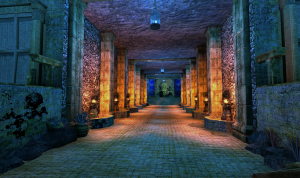 Engine: UDK Nov. 2011
Development Time: 16 weeks/350 Individual Hours
Team Size: 15 people
Description: The Rite of Elements is a single-player third-person puzzle/adventure game for the PC. It focuses heavily on the puzzle elements, providing a number of nuanced mechanics for the player to master. Players control the Mage, who uses a system of sympathetic magic to manipulate the elements within the environment in order to pass through a collection of trials, before finally engaging an ancient spirit in puzzle-based combat.

Core Responsibilities:
• Configured and implemented post-processing across the game world, including world post-processing to leverage UDK’s ambient occlusion and individual level post-processing across six visual themes.
• Placed all lights in the game world, across the above five visual themes. These six themes included one for each element (Earth, Water, and Fire), as well as an introductory area, a combined area, and a boss area.
• Created three glyphs, corresponding to the three elements, that became defining visual elements throughout the game and promotional material.
• Worked with a partner to design puzzles for the final level, which combined mechanics introduced in the previous three levels. 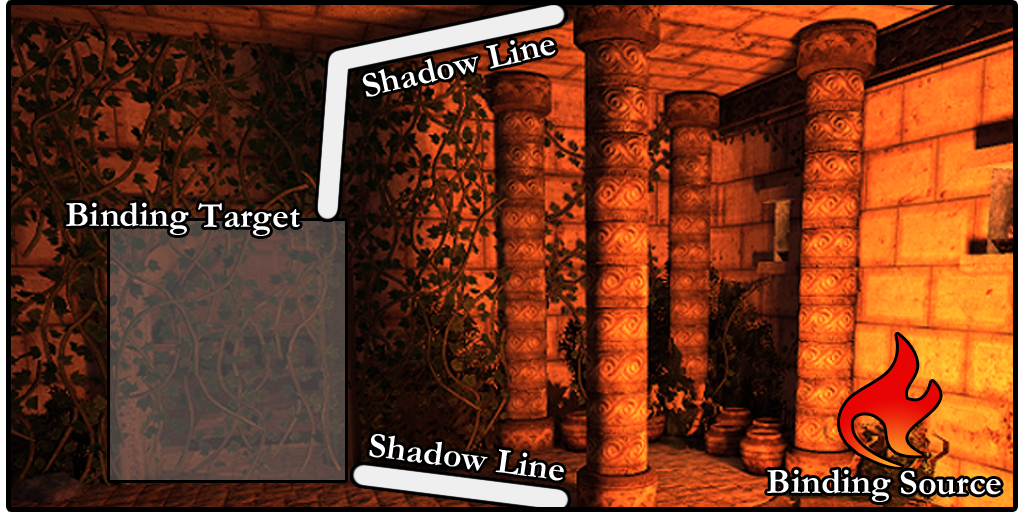 A large part of what I wanted to accomplish was using light as a tool to aid in player pathing. This presented a challenge specifically with the Fire level, as the most common way to accomplish this is to place light sources to highlight where the player should go. Fire sources are a both integral puzzle pieces and the primary light sources throughout the Fire level. They needed to be bright enough to dominate the scene, but this posed a problem with player navigation. To work with the game design and still accomplish my goal, I used shadows to draw lines between these fire sources and the other puzzle elements to help subtly guide the player through the space. In the above example – the first puzzle in the Fire level – you can see how the column clearly creates a large shadow that points the player from the fire source to the vines he or she must burn to advance. This technique helped highlight the puzzle design and help players understand these first puzzles, while they were still learning the mechanics.
Creating the Glyphs 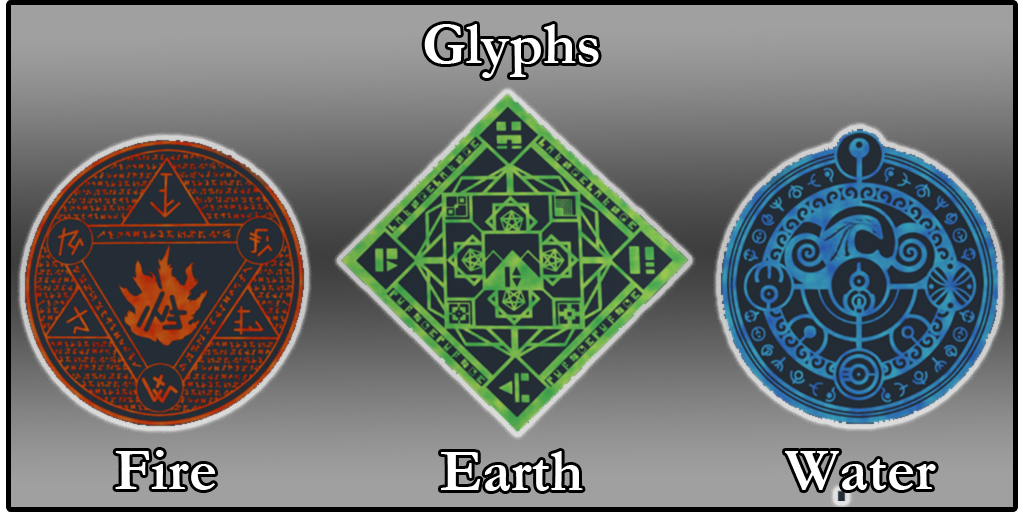 During development, I was given the task of creating the three glyphs that represented each of the elemental bindings in the game – Fire, Water and Earth. The concept behind the glyphs is that each element understands a different language – represented by the shapes found on the glyphs. Fire is largely based on runic symbols, with triangles tying them all together. Water features mostly circular and spiral patterns, representing the flow of water in nature. Earth is angular and has complex geometric shapes throughout, representing crystalline structure. These glyphs each evoke the element they represent and came to be used throughout the game and promotional material.
The Shadow Puzzle 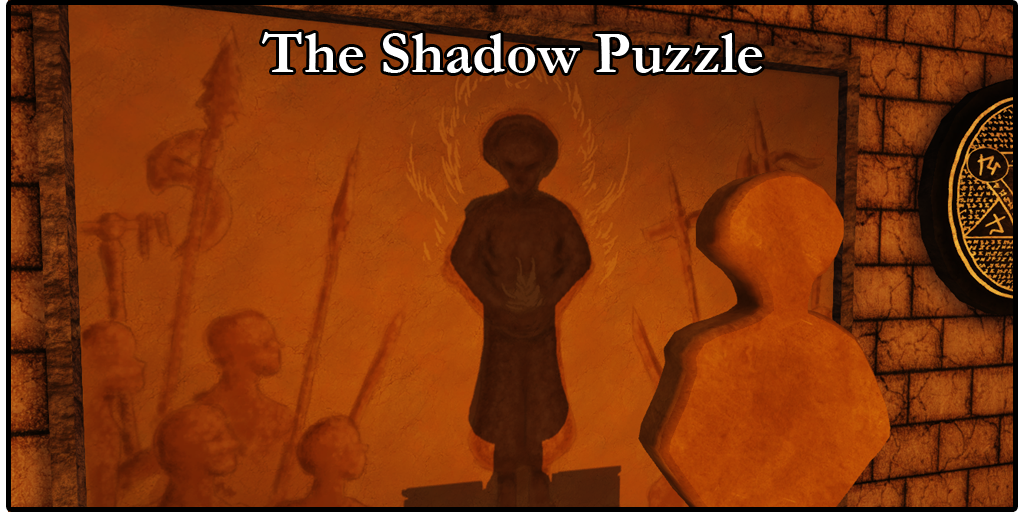 A large challenge facing the team was the Shadow Puzzle, featured in the Fire level. This puzzle was designed and built by other designers, but required appropriate lighting to function. Unfortunately, most of my lighting attempts created confusing shadows that never seemed to line up correctly. This created a huge problem with the puzzle, as regardless of where lights were placed, the puzzle would not properly function as the shadows could not line up properly. To fix this, a specific kind of light – a Dominant Point light – needed to be present in the room to create sharp, accurate shadows. Once this light was placed, the other lights in the room created crisp, properly placed shadows which allowed the puzzle to work as intended. The other lights in the room could then be modified to give the room the appropriate mood and coloring.
Light Functions 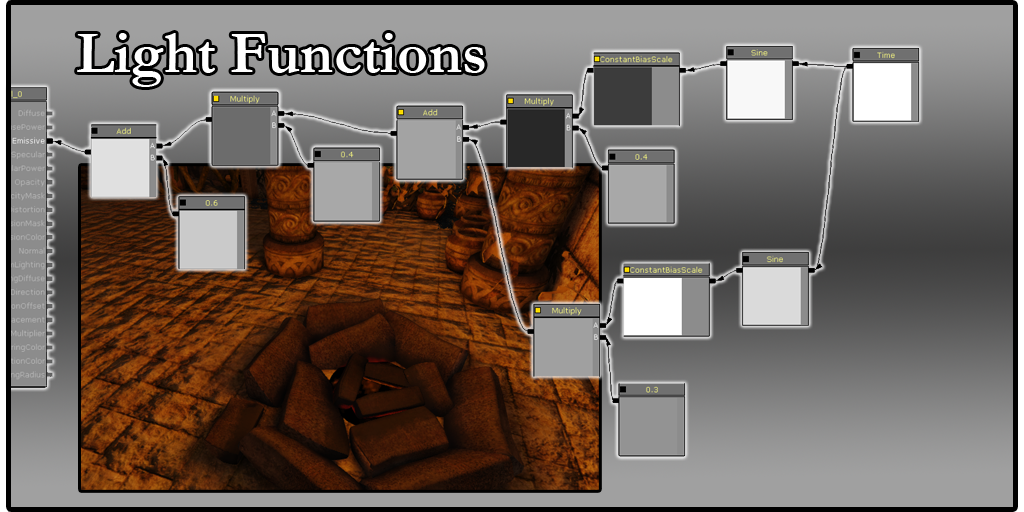 As fire was a major source of light throughout the game, we needed a way to create a flickering effect. To Matinee each individual light was not feasible, so I researched the subject and learned about Light Functions, which are materials that can be applied to lights that affect the light they give off. This can be used to create artificial shadows or cloud effects, but I used them to create a flame flickering effect. The material itself is based off two sine waves – offset so the flicker is never repetitive and predictable – added to a small constant to ensure that the fire is always giving off some light. This helped easily create a realistic flame effect that could easily be applied to any new light, saving a large amount of time controlling each light independently.

Lighting the World My primary role on the project was lighting the entire game world. As each of the three elemental levels represented a different element, each used a different lighting theme. The Fire level is predominantly orange, with blue and purple contrasting lights. The Water level is mostly blue and green, with some orange and yellow contrasting and purple complimentary lights. The Earth level is lit with green and yellow lights, with some red and orange contrast. These themes allowed each level to feel like the element, and gave the player a sense of progression as they worked their way through the game world. The additional levels – an introductory area, a combined level, and a boss level – each used a unique palette that was not based on any specific element. The introductory level opens to a cove, and so largely uses natural lighting until the player enters the Fire level. The combined level takes the player on a Gondola through massive caves, and is a deep purple with bits of interspersing light to cut through the darkness. The boss level takes place on top of the mountain, and uses bright yellow lights with light rays to give a sense of majesty to the Spirit’s throne room.