Engine: Unreal Tournament III
Development Time: 8 weeks/160 Hours
Description: “Chinatown Fair” is a 16-player Deathmatch level for Unreal Tournament III. It is a recreation of the classic Quake map “DM17,” with changes made to emphasize Unreal Tournament III’s gameplay. It is set in a futuristic Chinatown area and covered in neon lights. It features fast-paced, intense gameplay with a focus on advanced movement and interesting flow through a dense area.

Core Responsibilities:
• Created a strong neon aesthetic by modifying existing Unreal Tournament III assets, placing all environmental lights, and setting up post-processing.
• Placed all BSP and environmental statics to encourage a fast-paced flow with several advanced movement options.
• Configured all weapons, items, and player spawns to support a balanced play experience.
• Iterated on map flow and balance based on several rounds of playtesting. 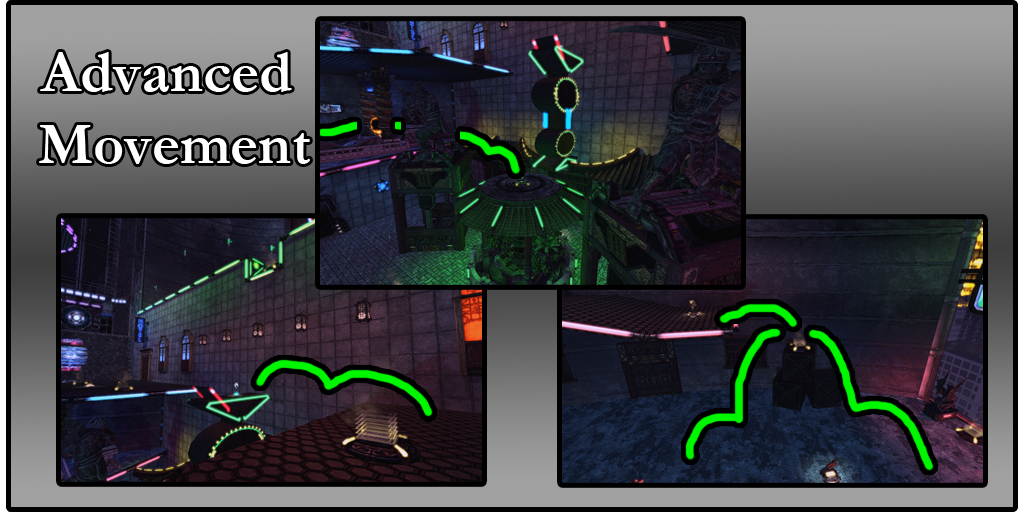 One of the major challenges in developing this map was creating options for advanced movement throughout the play space. I accomplished this through three key areas:

• The first, and simplest, is a quick double-jump that takes the player onto a bright neon martini sign, giving them a shortcut across two platforms and giving them a medium health pickup. This drastically helped flow across these two platforms, as previously a set of jump pads was the only way to get across quickly, which led to players landing in predictable positions and dying. It also helped with player survivability – offering more health kept skilled players alive longer, even in frantic 16-player matches.

• The second advanced option is the quick run behind the side teleporters, across a balcony, and on top of the gazebo. This helped flow for two reasons – it provided players an additional route to escape rather than the platform ending in a dead end with a teleporter and it provided important counter-flow to the back area with the Flak Cannon. Additionally, the jump boots themselves opened up many interesting and surprising avenues of attack, and were one of the better additions to the map.

• The third advanced movement option is a jump pad atop a pile of crates at each side of the arena. This provides an immediate shortcut to the very top tier of the level, but can only be jumped on from above or by using the Impact Hammer to boost the player’s height. It is the most complicated shortcut throughout the map, and provided much-needed additional flow to the top level. It allows players comfortable with movement to quickly escape or initiate combat across several different combat areas. 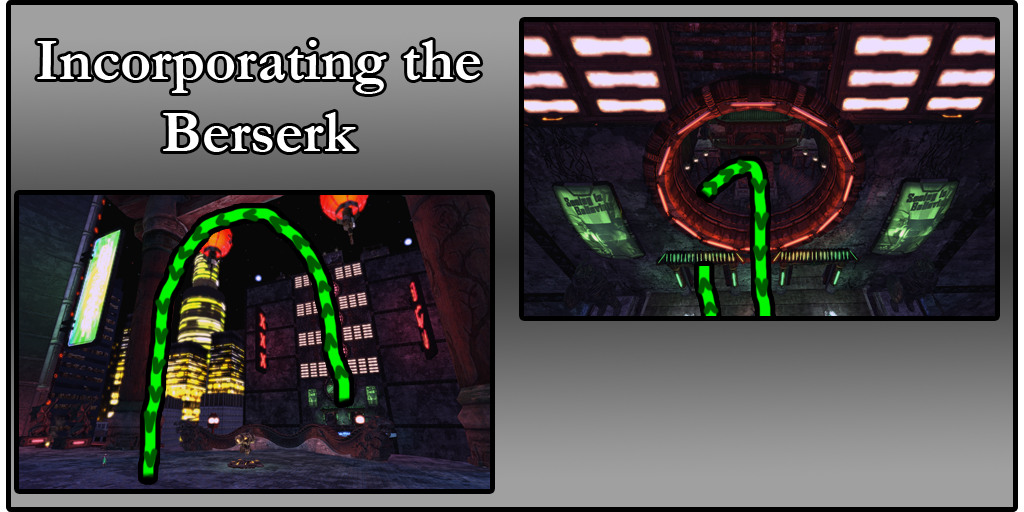 Another major challenge when designing the map was incorporating the Berserk powerup in a way that improved the overall feel of the map. I decided to implement it in a small room behind the sniper platform, close to a jump-pad to the main level. This prevented flow problems that would arise from it spawning on the main platform – creating a section of the map that had too much and caused gridlock or it getting entirely lost among the other pickups across the map. The jump back also provided a means to get into the action and use the powerup quickly, while being able to pick it in relative safety. The jump back brings players to the central hub of the level, narrowly missing the large shinto pillar at the front of the level, providing a nice visual wow moment as the player finds some prey.
Merging the Neon and the Traditional 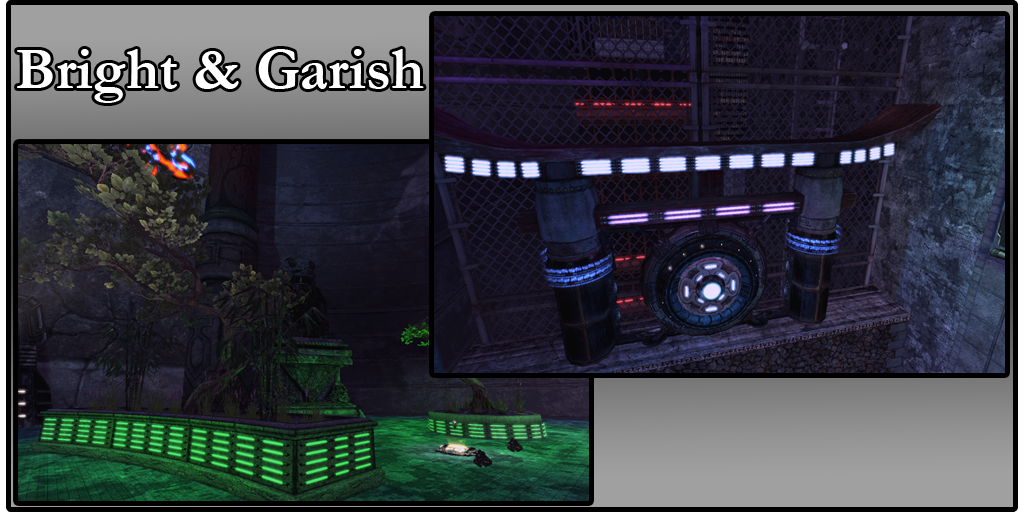 Creating the aesthetic was the other major challenge when creating this level. The Unreal Tournament assets provided a nice, traditional Asian base on which to build. However, one of the major hallmarks in nearly every reference image I gathered was bright, garish neon built atop traditional architecture. To accomplish this, I modified fluorescent light statics to create neon lights I could use for a variety of tasks, including highlighting player paths, differentiating sections of the level, and decorating these traditional assets to further develop the Blade Runner-inspired aesthetic. In the end, many of the more visually striking areas of the level used this technique.

Lighting as a Pathfinding Tool “Chinatown Fair” is a very vertical map, and is fairly dense. To aid in player pathfinding, as well as support the neon aesthetic, different sections of the arena feature differently colored neon lights. This helps to create a simple frame of reference for the player and helps prevent him or her from becoming lost – rather than having to identify any discrete landmark, he or she can simply note the bright color at a glance.

Compartmentalized Combat With 16 players engaged in combat, it was important to cordon off different areas to localize fighting and prevent anarchy – especially in a smaller map with fast-paced combat such as “Chinatown Fair.” If the map was too open it would cease to be fun and become a vicious cycle of spawning and immediately dying. In order to address this, I partially blocked off sections of the map – the bottom section with columns, the large hologram in the center, and the planters up top. This helped create smaller compartments in which most of the fighting could occur, while leaving the map open enough to allow for a variety of counter-flow.

Keep it Garish A very important design goal for this project was to create and maintain a strong visual aesthetic – that of a futuristic Chinatown area, reminiscent of Blade Runner. To accomplish this, traditionally Asian-inspired assets were used in conjunction with ornate and brightly colored machinery and lighting to create a sense of a living area that had been continually built on top of. The merging of these two themes allowed for a strong sense of place in the final product.

Advanced Movement Mechanics Part of what makes Unreal Tournament III an enjoyable game is the variety of advanced movement mechanics. Techniques such as diving, wall jumping, double jumping, and using the Impact Hammer all allow unique ways to quickly move through the environment. One of the important goals for this map was to provide a variety of shortcuts and alternate paths that took advantage of these mechanics. Areas such as atop the large martini sign are only accessible by falling or double-jumping across to them. Frequently, the player can use the Impact Hammer or Jump Boots to quickly move between level tiers, providing a fast way to escape or chase down a target.

Highlight the Berserk Powerup The final goal for the level was to include the Berserk power-up in a way that complimented the flow and pace of the gameplay. To accomplish this, I included the power-upin a small area behind the sniper platform. It spawns directly in front of a jump pad that puts the player back into the middle of the action, giving incentive to use it to immediately engage in mid-range combat. 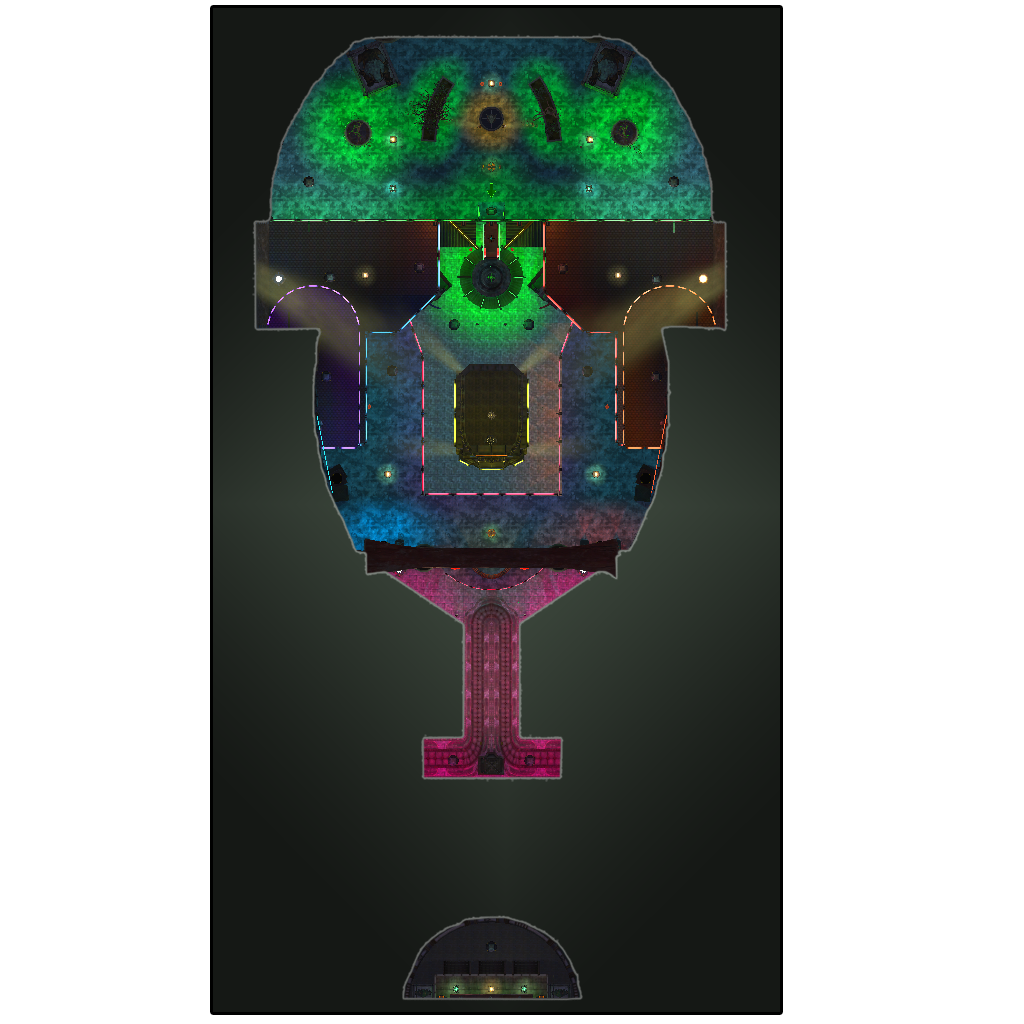 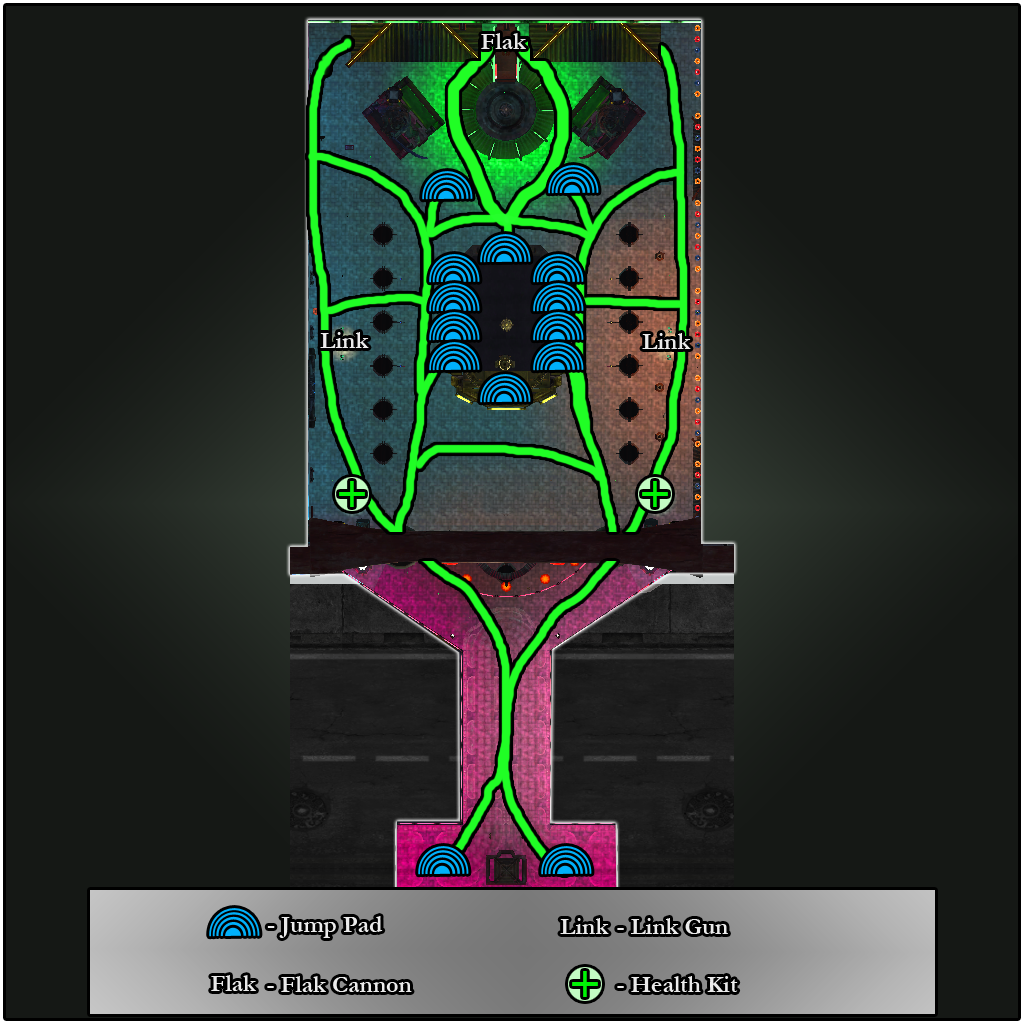 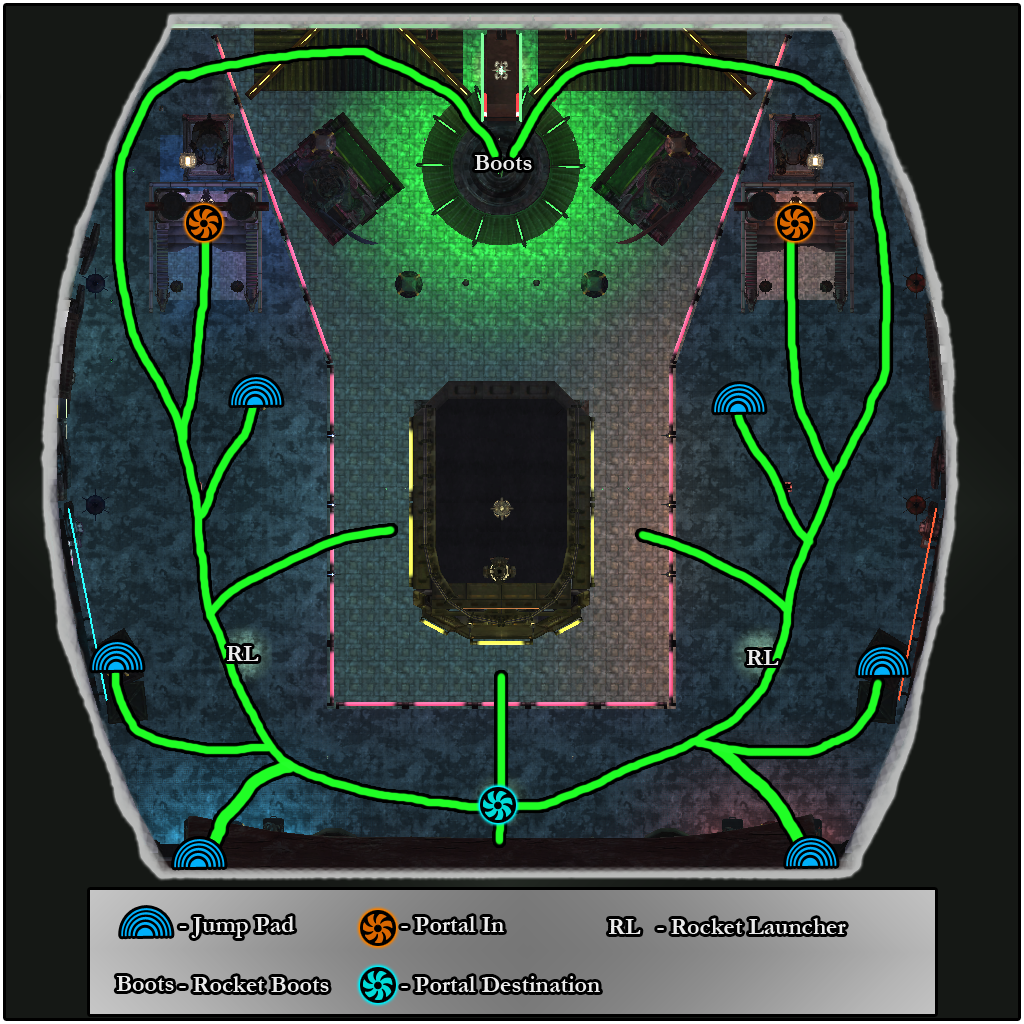 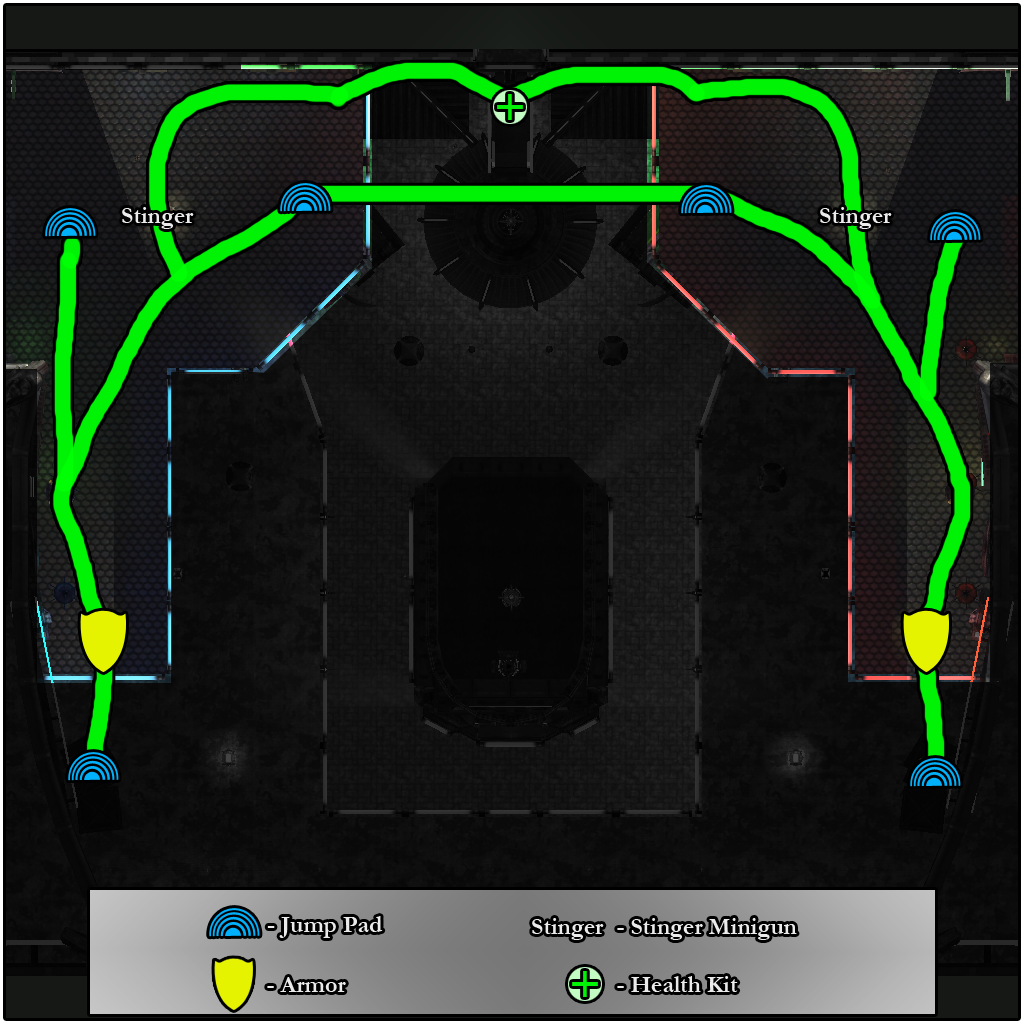 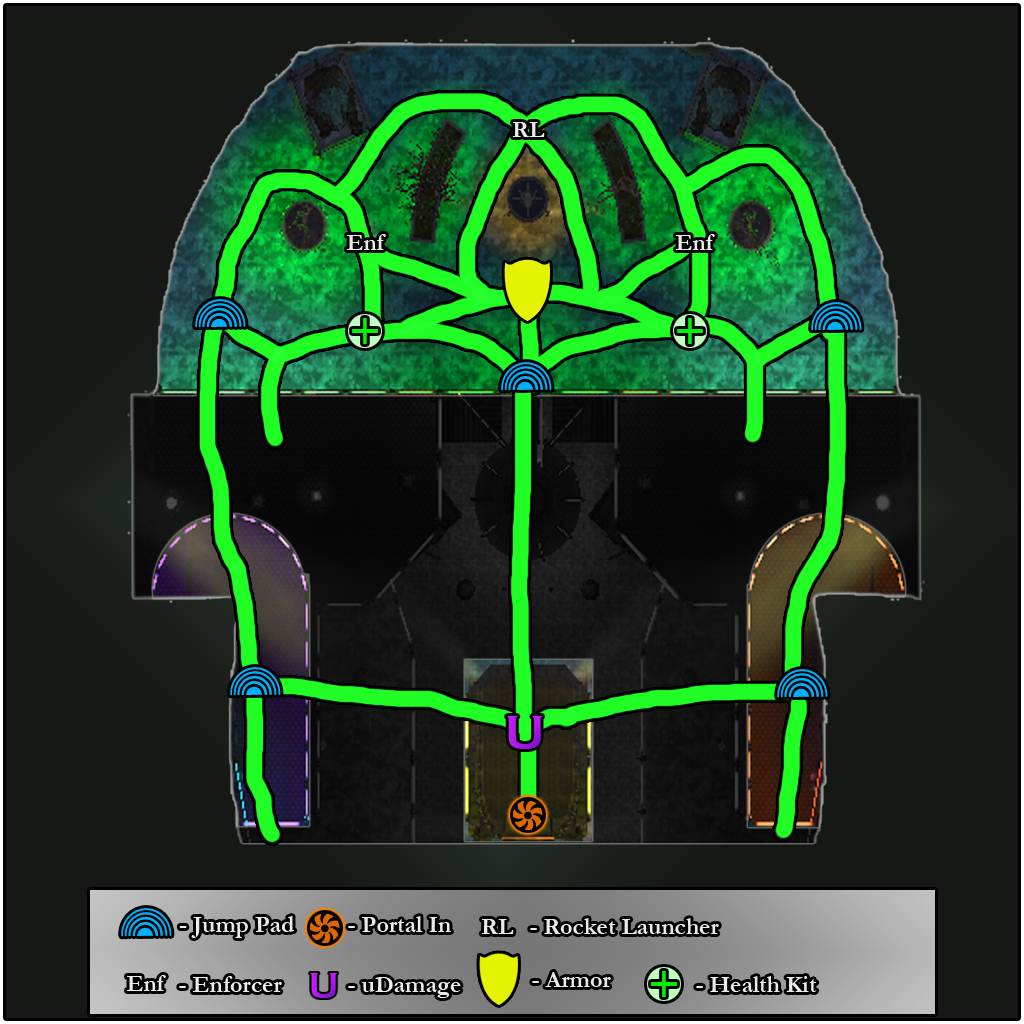 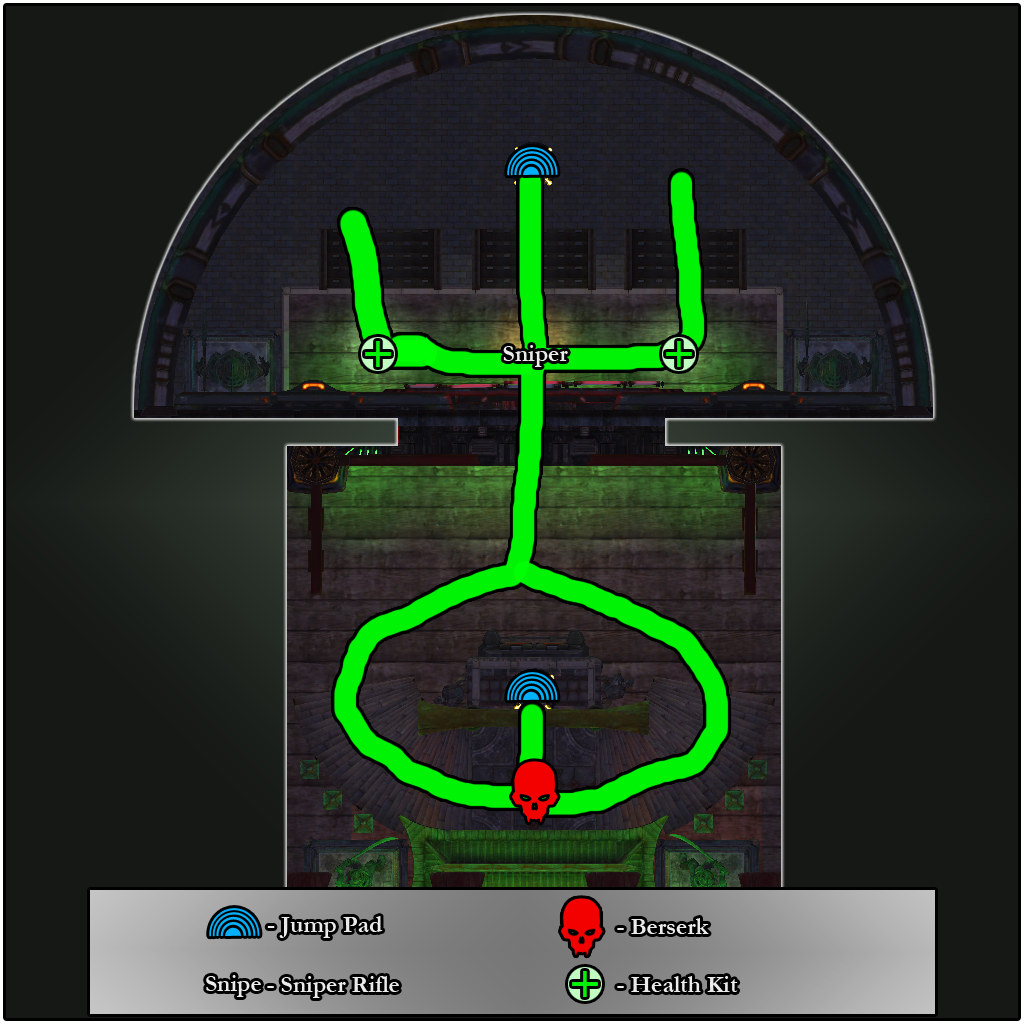