Engine: Gears of War
Development Time: 8 weeks/160 Hours
Description: “Wetwork” is a single-player level for Gears of War. It is a short, intense level that takes the player through a section of collapsed, flooding tunnels and pits him or her against a set of Lambent Locusts. The Lambent Locusts in the level include the existing Wretches, as well as Drones and a Boomer, which were created by modifying existing Gears of War assets. 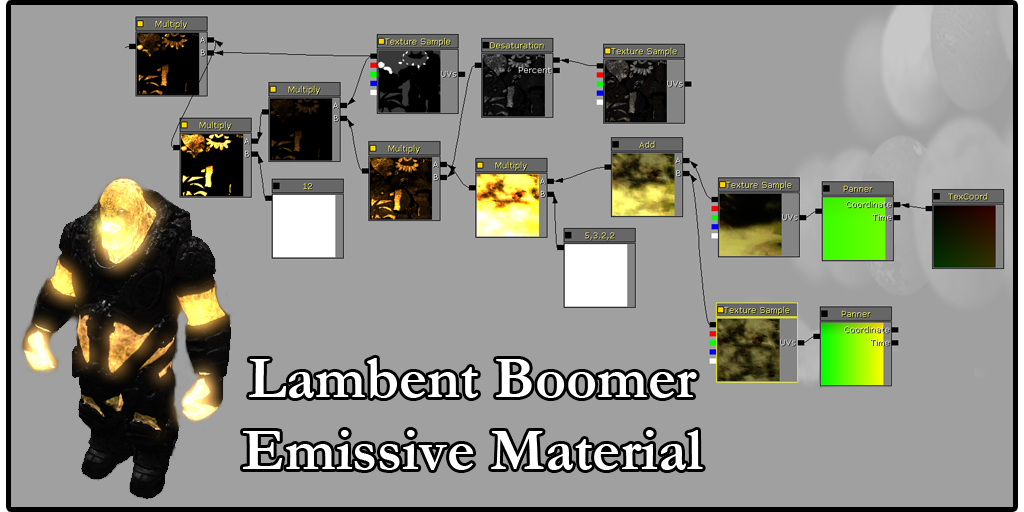 In order to turn the enemies from the default versions into Lambent, I created new materials based off of existing Gears of War assets. They use a custom emissive channel, shown in the image above. The base of the glow comes from panning clouds added together to create multiple layers of movement. These are multiplied by the bright yellow/orange Lambent color. To solve the problem of the emissive appearing too flat and washing out detail on the character model, the original material is desaturated and multiplied by these colored clouds to provide contours to the glow. As only the skin should glow, I created custom textures for each enemy type. These textures were flat grey in areas I wanted to glow a little, white in areas I wanted an intense glow (such as teeth, eyes, and claws), and black in areas that did not glow at all. These textures were then multiplied against the existing glow to complete the effect. From there, a simple multiply by a constant allowed me to tune the intensity of the glow for the final level.
Signs of Collapse 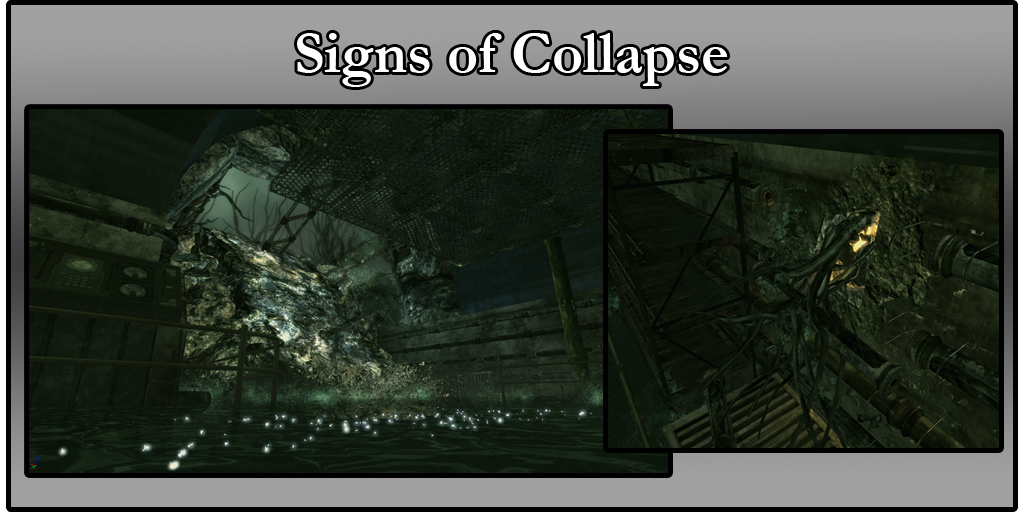 A major challenge when building this map was creating a real sense of collapse. The flooding in the tunnels, supported by a large system of particle emitters, formed the foundation for this. However, the level needed a believable reason to be flooding, and to this end I developed several collapsing sections. The largest is a full tunnel cave-in, through which the player gets a view of the storming exterior and gallons of water rushing in from broken pipes. Several small pipes have also burst throughout the level, with even more water flooding into the playspace. To create a dynamic collapse, I built a section with pipes collapsing from the ceiling following a distant explosion that violently shakes the tunnel. This helped create a more immediate urgency to the collapse, and helped call players’ attention to Lambent Wretches that enter along a nearby ceiling. The last major sign of collapse is a lambent tendril entering the tunnel after having grown through the wall. This served not only to help the collapsing aesthetic, but to foreshadow the new Lambent enemies later in the level.

A Lambent Lean Part of what I wanted to create with this level was more of a bridge between the Lambent Wretches of the first Gears of War with the more diverse Lambent of the later titles. To do so, I edited existing materials to create Lambent Drones and Boomers. I also worked with particles and lights to create death effects that differentiated them as Lambent. The end result are the orange, glowing Lambent enemies that help create a link between the Lambent of this game and those of later titles.

Strong Flooding Effects The primary focus for this map was the flood that has overtaken the service tunnels. By leveraging existing water statics and modifying various particle systems, I was able to create a consistent flood throughout the level. Various broken pipes and points of ingress for the water support this theme, and use modified Gears of War particle systems.

Signs of Collapse A large focus in this project was creating signs of collapse throughout the level. The primary collapse is large section where the tunnel has fully caved in on itself, opening the tunnels to the storm outside. Various cracked walls, broken pipes, and sparking machines serve to support this theme, as well as a section with actively collapsing overhead pipes. 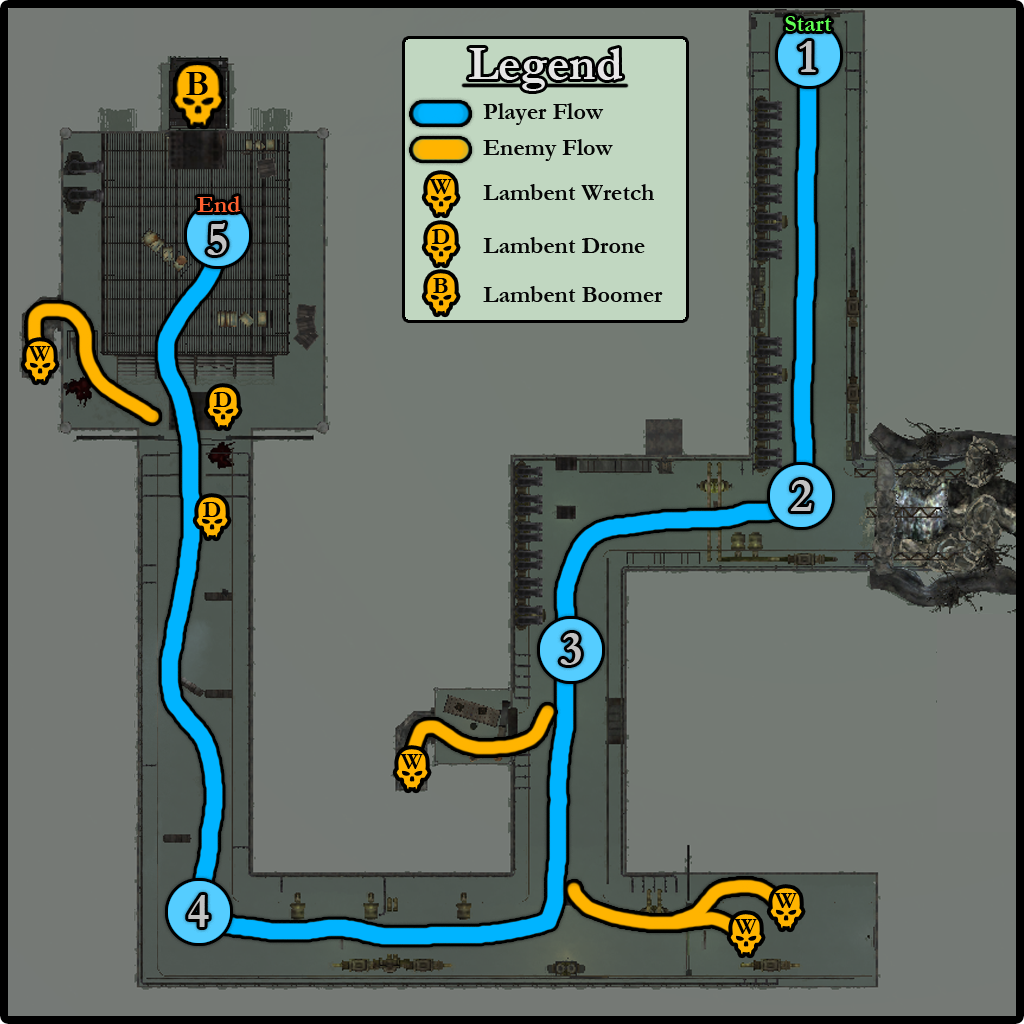 Flow Walkthrough:
1. The player begins the level and receives a radio transmission from Anya detailing the mission. This sets the stage and informs the player of an increased Lambent presence in the area.
2. This section of the tunnel has collapsed in on itself, giving a strong visual moment and a view of the storm outside.
3. The player encounters three Lambent Wretches – one that emerges from a side room and two that enter the hallway along the ceiling. This encounter serves as a warm-up and gets the player acclimated to combat within the tunnels.
4. This encounter introduces one of the new enemies – the Lambent Drone. The player encounters a pair emerging from the room at the end of the hall and engages in a firefight. After dispatching these and advancing into the room, a Lambent Wretch emerges from the side to keep the player wary and keep tension high as the player enters the final encounter.
5. The Lambent Boomer enters the room via the elevator shaft at the rear. His explosive entrance and the following battle provides an intense close to the level, leaving the player victorious over the powerful and explosive new enemies.