Title: Borderlands 2: How Marcus Saved Mercenary Day
Engine: Unreal Engine 3
Description: This DLC features Marcus enlisting the Vault Hunters to track down his lost shipment of guns, and in the process save the town of Gingerton from the Abominable Mister Tender Snowflake. It includes one primary mission, one side mission, holiday-themed enemies, and a unique themed boss fight. 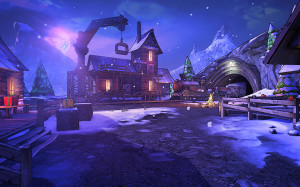 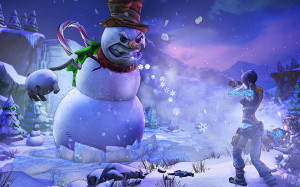 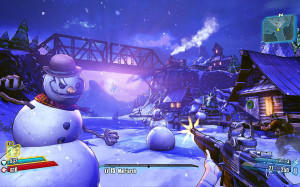 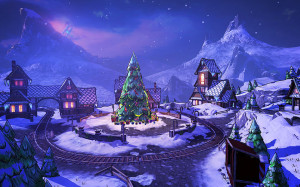 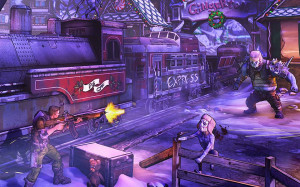 Creating An Interesting Sub-Objective One of my main goals in this project was creating a sub-objective that was memorable, thematically appropriate, and fun for players. To accomplish this, I designed a short sequence while the player approached the bandits, who had taken over a train station. Players come upon bandits patrolling around the car and hitching the last train car onto an enslaved yeti. As soon as players near, or alert the bandit to their presence, the yeti begins pulling the train car away, into a nearby tunnel. Players who deal enough damage to enrage the yeti cause him to break free and attack both players and bandits, and players are then able to board the stolen car and gain access to a large treasure chest. This objective required setting up AI patrol routes and perches, balancing the Yeti’s health and movement speed, integrating with the mission system, scripting the movement and animations, and working with the Level Designer to refactor layout and present a well-framed objective as players approached.

Enemy Spawning Another goal for the project was setting up bandit patrol routes and spawns. Several bandits spawn before the players approach and move between a system of perches – creating both a sense of life and a cue to players that they are entering a combat arena. Once players engage the bandits, others spawn in waves by emerging from snow banks, jumping through a thin layer of ice, jumping from surrounding cliffs, or simply walking through doors. Each spawn needed a clear origin point, animation tweaks to fit the specific area, and additional iteration to make sure it worked with all enemy types that used it. The main objective of this task was ensuring these spawns occurred at a fun pace, made thematic sense, and occurred where players had a clear view of new opponents entering the field.